These are just a few examples of successful people who were once failures but then went on to great fame. There are several classic themes that resonate with people...rags to riches,
epic journeys, and the underdog story to name a few. One such theme is the comeback story where the protagonist repeatedly fails only to overcome adversity and turn into a great success.

Other famous "failures" include Oprah, J.K. Rowling, Dr. Seuss, Disney, and Lincoln. Even Einstein was deemed a failure as a young student.

Columbus had the courage to set sail the opposite way! He failed by not finding India but his voyage was still a success. Admittedly, Columbus didn't discover America but he did popularize it as a destination for future generations of Europeans which laid the groundwork for what it would become.

Sergey Brin from Google talks about the importance of failing fast. He learned from his early days at Stanford that there is tremendous value in trying things out and learning from them quickly.

We learn how to walk and ride a bike by continually falling and scraping knees until we are able to balance. Failure is a part of the process. What is it about becoming adults that makes us so afraid of failure? So risk adverse? According to FearOf.net, fear of failure, or atychiphobia, is the 15th most common phobia in the world.

Perhaps it is not the failing that frightens us but the risks involved. Failing is inherent in risk-taking endeavors. The poet Frances Mayes says "The world cracks open for those willing to take a risk."
Thomas Watson, who led IBM to great heights while taking significant risks once quipped "If you want to increase your success rate, double your failure rate." 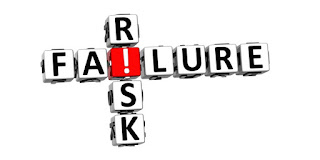 Too many parents in this generation are doing a disservice to their children by shielding them from failure at all costs. The children are being robbed of growth opportunities in favor of an ill-conceived attempt at protecting their fragile egos. Instead of helping them develop it deters them from becoming resilient.

Below are some instances of failure that have stuck out in my head and what they taught me...

As a speaker. Having a lackluster presentation can be painful but it is a humbling experience and a great incentive to go back to the drawing board and improve.

As a student. Bombing tests. I don't remember all my A's but I can recall with accuracy all the details of each failing grade that I have received.

As a parent. When your 4 year old looks up and pleads for you to put down your phone and play with him.

Writing this post has reinforced my belief that failing is a positive thing and that it is an integral part of growth and personal development.
It has inspired me to go out and fail miserably at something today.
Please try the same and let me know about your experience.
Email Post