How to Lose Weight By Making Small Changes

I weighed 175 lbs at 5' 9" for my entire adult life. I didn't set out to lose weight and felt normal being 175 lbs. But after a 10 mile race about a year and a half ago, I decided that the only way for me to improve my performance was to run on a leaner frame. I was running a 5k in approximately 19:30 (6:16 pace) but I wanted to be running it in under 19 minutes. After being honest with myself and my goals, I realized that I would need to weigh around 159 lbs to run how I wanted.

The question then became how to lose the weight without going on a "diet." Diets are short term and simply don't work. I already ate fairly well and rarely overindulged. What I found was that it was fairly easy to lose weight by slightly adjusting many of the things I was eating each day.
I made several small tweaks that led up to losing nearly 30 pounds instead of a total overhaul of everything I put in my mouth. A lot of what I did was influenced by BJ Fogg from Stanford. Here is a TED Talk that BJ gave and his website can also be helpful to anyone trying to make some behavior changes.

Change is inherently difficult and most people avoid it at all costs. It is much easier psychologically to make a series of small and simple tweaks than it is to make revolutionary changes. I didn't have a well written strategy to change my eating habits. I just kept an open mind and made one or two at a time. An example of some of the small habits I changed are below. The weight came off steadily over the course of about one year. I was able to run a personal best time in both my 10 mile race as well as set personal records in other distances.

Cereal- I measured out the amount of cereal I was eating each morning and realized it was closer to two servings. Of course, changing it to 1 or 1.5 servings was difficult but only for a bit. My stomach quickly adjusted to the smaller portion. It was the visual cue of filling the bowl up that made it more difficult. I always try to use smaller plates and bowls at home. We eat with our eyes!

Switched from Skim to Soy Milk- This saved about 10 calories per serving and made me feel better throughout the day. Too much dairy can be problematic.

No Alcohol During the Week- I was never a heavy drinker but realized that the occasional beer during the week was usually accompanied by a snack that was a few hundred calories.

Night snacking- This was difficult to do because my family tends to eat dinner relatively early so I am famished by 8 or 9 pm. .  However, I did allow myself to have a few morsels of dark chocolate if my blood sugar dropped. I also found that my sleep quality improved when sleeping on an empty stomach.

Iced Tea- I haven't drank soda since I kicked Mountain Dew cold turkey in 1997. But I do like iced tea and had it often with lunch. I started reading more labels and reminded myself that the amount of sugar beverage makers are adding to these drinks is unconscionable.The switch for me was lemon water and stevia.

This drink has the equivalent of nearly 12 teaspoons of sugar!

Salads instead of sandwiches- The story I told myself was that if I had a salad at lunch then I would be too hungry by dinner. That wasn't the case and if I did get hungry then I would snack on bananas or carrots.

No "Cheating"- I hate the word "cheating" when it comes to eating but I really tried to not allow myself to eat any junk for more than one meal each week. The longer I adhered to this the more I actually wanted to eat clean foods.

Sugar Packets- I'm a coffee drinker and once used around 3-4 sugar packets in a large coffee. Now I use two and that saves about 30 calories a day or roughly 11,000 calories per year.

Cardio- I was running a lot of miles during this time but lost the first 15 lbs before I increased my mileage much. The rest came off with a lot of running, HIIT training, and weights. No amount of exercise will compensate for a poor diet!


Some of the key things I learned:

Self-discipline is infinitely easier when you can attach meaning to what you're trying to do. Runners at the level that I wanted to achieve don't generally weigh 175 lbs.

Tiny steps help you to pile up successes. With each success, the next one is easier.  By lowering the bar to start, you're more likely to take action. The cumulative effect of these tiny changes can be very surprising over the course of time!
For each small change, I realized that there was a story that I was telling myself that was not true. For example, I don't drink soda so having an iced tea with lunch is acceptable.

In the end, it was never about losing weight. It was all about my larger running goals so the weight loss became just a byproduct of my training. This made it easier to form new habits and to stick with them throughout the year.

I'm interested to hear about any small habits that you have successfully changed.

Disclaimer: I am not a dietitian and the above represents my personal story on weight loss. Please consult a registered dietitian or your primary physician if you have questions about your specific dietary needs. Many health plans now cover annual 1:1 sessions with a dietitian or health coach free of charge! 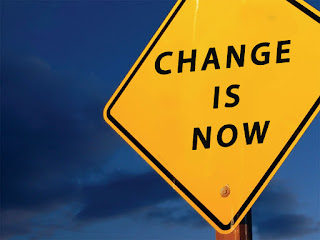