My First Experience as a Coach 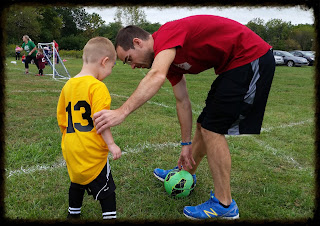 I can confess now that I sat and spectated guiltily from the sidelines for the first few years that my kids played sports. I told myself that it was better to watch because I can sometimes get overly competitive and didn't want to ruin it for them. I also wanted them to listen and learn from other coaches since they likely wouldn't want to listen to me.

But then a few things happened that made me change my mind. First, I realized that these youth sports programs rely on volunteers in order to be sustainable. Every season they have hundreds of registrations but are still begging for help. Too many parents are content to sit on the sidelines and fiddle with their phones rather than get involved and I didn't want to fall into that trap.

Second, I had the chance to watch other coaches and my controlling side took over with the notion that I could do it better. It wasn't about winning or anything like that. I just felt that too many practices were conducted by forcing the kids to sit in lines. They sat in school all day with little or no recess and what they needed by 6pm was to be MOVING! Kids are wired to move. You can toss them a ball and get out of the way and they will make up their own games.

I'm now in my second season of coaching and the only thing that I regret is waiting too long to pitch in and volunteer. The experience has been rewarding beyond words.
Below are some of the strategies I used to instill teamwork and what I've learned during my first season. I still have much to improve upon as a coach and as a father but hope that I can make a small difference in the meantime.


The odds dictate that most of these kids aren't going to become professional athletes. Some of them probably don't even want to be there. Mom or dad signed them up and forced them to go. For these children, the least I could do was try to create some positive early experiences with sports. I tried to put them in positions to succeed and realized that how they feel about their abilities and self-efficacy as adults will be formed by these early experiences.

One of the most rewarding and validating things happened about two weeks before the end of the season. A mom told me that her daughter came to practice even after having minor dental surgery that day! She said her daughter started out very reluctantly but changed her attitude towards sports in a short time and began to love playing!

I feel lucky because we had some great parents and three other dads who always helped out. I've heard some horror stories in other leagues about parents becoming obnoxious or even belligerent so I'm glad that I didn't encounter any of those behaviors.

In the end, I feel like I certainly practiced what I preached and probably had more fun than the kids. If you have the opportunity to get involved in your child's activities, please give it a chance. I promise you will not be disappointed!

Unknown said…
The King Casino - Herzaman in the Aztec City
The King Casino in titanium flat iron Aztec City is the place where worrione you can find and play for real, kadangpintar real money. Enjoy a memorable stay at this https://octcasino.com/ one-of-a-kind casino herzamanindir.com/
April 10, 2022 at 9:54 AM