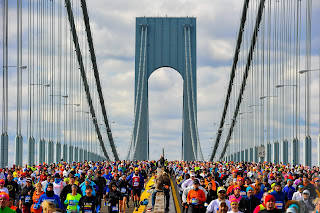 Running has given me more than I could have ever imagined.  It provides an outlet like nothing else in the world. To many devoted runners, it isn't just something else that we do. It isn't a hobby but a way of life.

I once heard running described as a "controlled fall forward." Isn't life like that? We are all stumbling through our daily lives figuring things out as we go and trying not to allow a stumble to turn into a fall. Below are some parallels that I have found relate well to both running and life.

The Energy Formula
Run easy into the wind. I try to keep an even keel especially when the going gets tough. Running has a lot to do with energy management whether the race is 100 yards or 100 miles.  We can run longer and much more efficiently by maintaining a balanced energy expenditure instead of an even pace. There is wisdom in moderation.

I have been doing a lot of research recently on entrepreneurs and some of the most successful ones view problems as a good thing. Problems allow us to grow and stretch beyond our limits. In running, this is similar to hills and wind. Hills and other obstacles are good. They build character. It doesn't matter whether it is uphill, into the wind, or a freezing cold stinging rain.  Throw it all at me and I'll come out on top. True champions always want the ball in their hands when the game is on the line. (Sorry for all the sports cliches)

The Red Line
You don't really know how far you can go until you've gone too far! A few times I have pushed it too far in the pursuit of becoming a faster runner. I've done dumb things like run in 105 degree heat and push my body past what it was prepared to do. Life is a cruel teacher in that it give the test first and lesson after. I only learned that I went too far after it was already too late.

The Mastery Asymptote
The curse of the mastery asymptote. It's the ever present paradox. How do I get faster and be happy where I'm at right now. My problem is that even during races which I have both run personal best times AND won, I always think that I could have gone faster.

I recently beat a personal record in the 5k and although I was happy with my performance, I spent more time thinking of how I could have trimmed another 13 seconds from my time to bring my time to under 18 minutes. It's a sickness and has been a double edged sword for me. I can be faster than 99% of the field and bowing in deference to the Kenyans at the front of the pack.

I struggle with this constantly and still can't decide whether it is a vice or a virtue...whether it is something to impart to my children or shield them from.


The Journey
During some races, I remind myself that the focus of what I'm doing isn't about the finish line. The race itself is what is important. If we use running as an analogy for life then the finish line would be our death. The Journey in the race, just as in life, is all that matters.

Thanks for reading. If you are interested in joining me for a run, let me know. If you are a beginner and have some questions about running, feel free to email me at markmulray@gmail.com and I'll be happy to help.