The Most Dangerous 4 Letter Word! 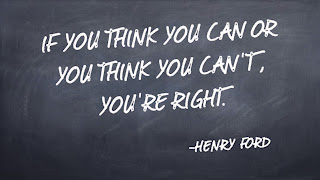 Do you have any words that make you cringe? Words that you wish were removed from the language? For me, that word is "CAN'T."

When my kids started talking, this is the one word I would never allow them to say. I'm not some overpowering Tiger Dad. I just want my kids to always be cognizant of saying it then to stop and think.

Our self talk is such an important part of our development. It guides our beliefs of what is possible. I can't control what my kids will ultimately believe or how they will act (nor do I want to). However, I can influence their self-efficacy later in life by simply banning this destructive 4 letter word from their vocabularies.

Can't is lazy. It gives you an excuse not to try.

Can't is terminal. By saying to myself, I can't do it, I immediately stop looking for answers on how it could be done.

Can't should be taken as a challenge. I remember when I was a child a friend's dad gave us combs that said "unbreakable." Challenge accepted. I snapped that thing in half about 10 seconds later.

Can't puts others down. We should be building others up! When I turned 30 and started to train for an ironman, a guy at work told me "You can't do that!" What he really meant was that he couldn't do it! By contrast, I had a mentor who built up my confidence by telling me that I could do it.

When I hear of someone accomplishing a great feat like completing 50 consecutive ironmans or running across the Sahara and find my inner voice saying, "Wow, I could never do that!" I immediately answer myself by saying, "You're right!"